Broughgammon Farm did the Rathlin Sound and Maritime Festival 2014! 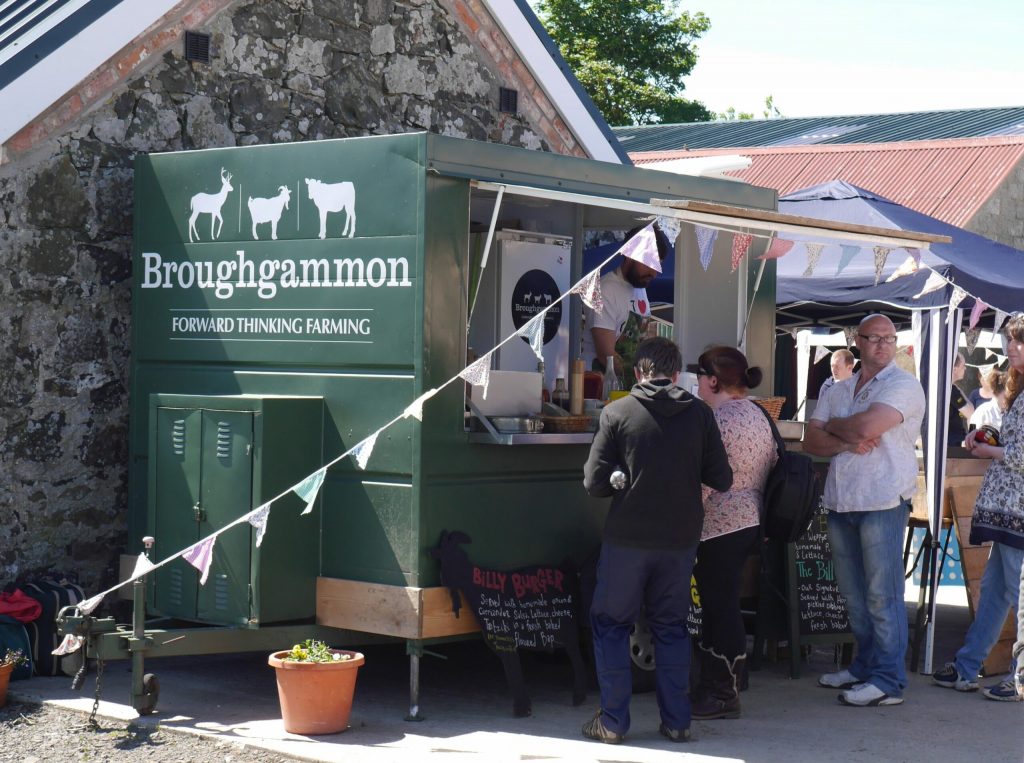 Once again Broughgammon Farm took to the seas in a bid to impress and feed the hungry islanders of Rathlin Island.

Having been there a few times the Broughgammon Boys knew what to expect, good music, great fun and lots of food! Needless to say the 2014 Rathlin Sound and Maritime Festival was once again a great success, including the Donegal band: ‘Goats Dont Shave’. Filled with Billy Burgers, Rose Veal Ciabatta Sandwiches the band wen down a treat, nearly as well as the Sweet Chilli Goat Meat Sausage and Duck Egg Baps for breakfast!

This coming week will be equally as manic and busy, with the coming of the 2014 Open Farm Weekend. After such a successful last year, even with the weather, Broughgammon Farm will be participating in this years nation wide Open Farm Weekend on the 14th-15th of June! Whereby we will be open to the public from near and far to examine how we do things!

This special event intends on teaching and educating people on where there food originates and how it gets to their plates! We are also planning on organising some interesting talks on the way our world works and how we arrived where we are today! So keep tuned in for more details! Or take a look at:http://www.openfarmweekend.com/

The BIG Difference from last year:

We are hoping to have a Wild Bird of Prey Display along with some Ferrets!

Many more ideas are welcome!

Plans for the weekend are already well advanced with local producers from Ballycastle Market setting up stalls alongside a few outside traders!

We are also hoping on some hands from as far as Dublin to bring us some traditional Irish Music.

We have a ‘mini fete’ with activities such as:

Broughgammon Strong Man Games, Including:
Toss the strainer, Flip the tyre, wang the welly and pull the wee tractor!
This is a distance based exercise, winner takes home! (Will also have a Broughgammon Wee-Man Games for the wee’uns!

We’re also hoping to have Historical Actors in attendance telling you all about the origins of the modern day potato, and maybe even let you know about the mysterious sous-terrain located somewhere on the farm!

If not we may just have some clowns messing about!

If that doesnt float your boat then there will still be plenty of Farm Animals to see with Sheep, Ducks, Chickens, Geese, Pigs, Cows, and who would know it! Lots and Lots of Goats!!

There’ll even be a little goodybag for any of you feeling green-fingered enough! Just so you can really appreciate ‘field to fork’!!!

We will also be hosting the Open Farm Weekend “Design a Welly” competition. So please send all entries directly to the address above before June 7th. The team will be picking the best local entry and awarding a prize on the weekend. The lucky designer will have the chance of being picked as the overall Northern Ireland winner and the chance of winning a “mini-farm” pack for their school.

We’re all very excited here on the farm, the goats, pigs, sheep and many more wee critters are buzzing with excitement for this fun filled family weekend!

Bacon, Coffee and our Favourite Cafe in Northern Ireland-Chat with Babushka

We use cookies on our website to give you the most relevant experience by remembering your preferences and repeat visits. By clicking “Accept All”, you consent to the use of ALL the cookies. However, you may visit "Cookie Settings" to provide a controlled consent.
Cookie SettingsAccept All
Manage consent

This website uses cookies to improve your experience while you navigate through the website. Out of these, the cookies that are categorized as necessary are stored on your browser as they are essential for the working of basic functionalities of the website. We also use third-party cookies that help us analyze and understand how you use this website. These cookies will be stored in your browser only with your consent. You also have the option to opt-out of these cookies. But opting out of some of these cookies may affect your browsing experience.
Necessary Always Enabled
Necessary cookies are absolutely essential for the website to function properly. These cookies ensure basic functionalities and security features of the website, anonymously.
Functional
Functional cookies help to perform certain functionalities like sharing the content of the website on social media platforms, collect feedbacks, and other third-party features.
Performance
Performance cookies are used to understand and analyze the key performance indexes of the website which helps in delivering a better user experience for the visitors.
Analytics
Analytical cookies are used to understand how visitors interact with the website. These cookies help provide information on metrics the number of visitors, bounce rate, traffic source, etc.
Advertisement
Advertisement cookies are used to provide visitors with relevant ads and marketing campaigns. These cookies track visitors across websites and collect information to provide customized ads.
Others
Other uncategorized cookies are those that are being analyzed and have not been classified into a category as yet.
SAVE & ACCEPT