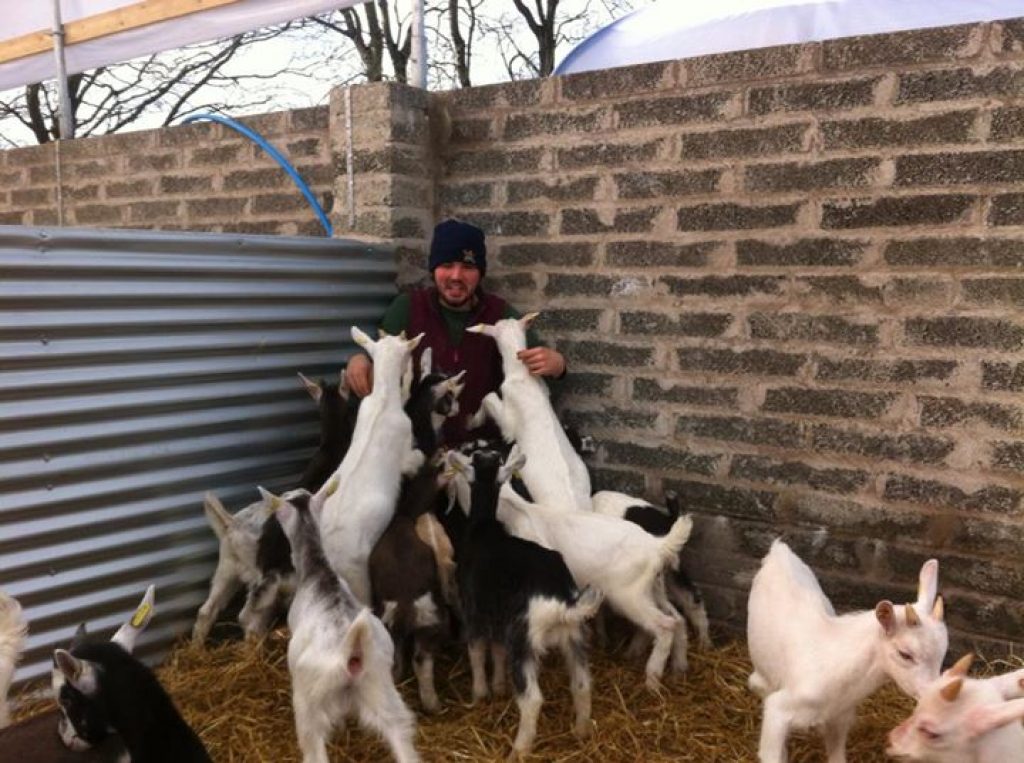 Well, February has been a superb month!

Despite all our best intentions, a series of post-christmas excuses meant that we didn’t actually start our feeder fronts until the beginning of february! (we had hoped to have got them out of the way pre-kidding season!)

So we’ve been left this month with a bit of a juggling act between a building site, escapee 6 month old goats, increasing numbers of new-born kid goats (and decreasing space, and now escapee kids too!! But not long now until the feeder fronts are in and we can move across into this new space!

And to top all of this off we’ve had a special little arrival of our own too!

Fed up of escapee goats, they really are master contortionists, we have finally bitten the bullet and are upgrading from our ramshackle assortment of sheep hurdles to purpose built feeder fronts.

We have taken a similar design of feeder front from the dairy farms. this allows the kids to access feed from the feed passage without soiling it with their feet, or escaping!

For us these pens will allow us to keep the goats happier, its a raised passage, which allows them to browse for their food, which they prefer. It will also allow us to start rationing their food, allowing us to provide you with more uniformity- no more fatty goats! In doing so this will reduce their feed-intake, reducing their carbon-footprint. It will also allow us to move to coarse feed, rather than a pellet, as there’ll be no more sorting, so we can gradually introduce more local grains, and reduce our reliance on imported feedstuffs! Best of all though, one end of the barn opens up onto the field, so it won’t be long until we’re free range kids also! So gradually getting more permacultural with every step!

So whilst this has been going on we’ve also been busy with kidding! This is a great time of year, we take the un-wanted Billy kids from the dairy farms. They’re a by-product to the dairy industry, the Nanny’s needing to kid to produce milk, the nanny-kids being kept as replacement stock, but the Bucks having no purpose in this industry. For us there was no doubt as to what needed to be done, if we want to eat goats cheese, then we need to eat Billy-kids, giving their lives respect, dignity and a purpose!

So every January and September we open our doors to as many kids as we can take. We keep them in small groups of five to begin with, allowing us to train them to a milk machine with an artificial teat. As soon as they’re used to this and feeding well we open up the pens to larger groups of kids so they can all frolic and play together. By seven weeks they’re well on their way, are weaned and opened up to an even larger group.

And the real news!

Well if we’ve been a little useless lately, its because we welcomed this little fella to the farm! Born the 07/02/17, our wee Rupert!

A Look Back at Open Farm Weekend

We use cookies on our website to give you the most relevant experience by remembering your preferences and repeat visits. By clicking “Accept All”, you consent to the use of ALL the cookies. However, you may visit "Cookie Settings" to provide a controlled consent.
Cookie SettingsAccept All
Manage consent

This website uses cookies to improve your experience while you navigate through the website. Out of these, the cookies that are categorized as necessary are stored on your browser as they are essential for the working of basic functionalities of the website. We also use third-party cookies that help us analyze and understand how you use this website. These cookies will be stored in your browser only with your consent. You also have the option to opt-out of these cookies. But opting out of some of these cookies may affect your browsing experience.
Necessary Always Enabled
Necessary cookies are absolutely essential for the website to function properly. These cookies ensure basic functionalities and security features of the website, anonymously.
Functional
Functional cookies help to perform certain functionalities like sharing the content of the website on social media platforms, collect feedbacks, and other third-party features.
Performance
Performance cookies are used to understand and analyze the key performance indexes of the website which helps in delivering a better user experience for the visitors.
Analytics
Analytical cookies are used to understand how visitors interact with the website. These cookies help provide information on metrics the number of visitors, bounce rate, traffic source, etc.
Advertisement
Advertisement cookies are used to provide visitors with relevant ads and marketing campaigns. These cookies track visitors across websites and collect information to provide customized ads.
Others
Other uncategorized cookies are those that are being analyzed and have not been classified into a category as yet.
SAVE & ACCEPT